This past Thursday I participated in the third annual Restore & After Silent Auction Event. It is such a great charity event to raise money for Habitat for Humanity. For the past two years my friend Eric Wilkerson has done an excellent job at organizing this event. He has asked me again to take pictures at Restore and After. I love volunteering my services because it is such a fun event. With a live band, plenty of people, food, drinks and pieces to bid on, this year was no exception!  Each year, it gets bigger and better than the last. Local artists and businesses take pieces and redo them. They are then brought to this event, "Restore and After" to be auctioned off to raise money to help build homes for those who can't afford to do so themselves. This year there were so many more businesses involved and a lot more restored pieces to auction on - pieces such as couches, dressers, chairs and even dog houses! 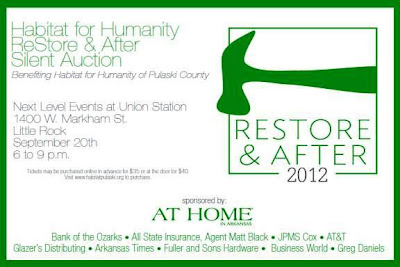 Last year the hot ticket items were four dog houses that local artists had painted and redone. There was a bidding war between several of us for the houses. 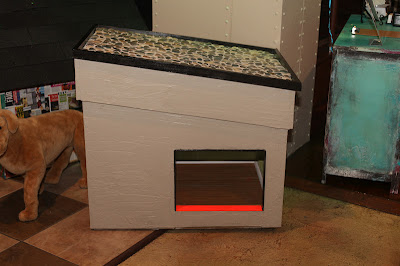 I was pretty pumped to see more dog houses again this year. This modern dog house caught my eye. I thought the roof of house was so different! I just love the pebbles. I bid on it and WON! It might not be big enough for Scooter but I'm hoping Conner takes to it nicely. :) 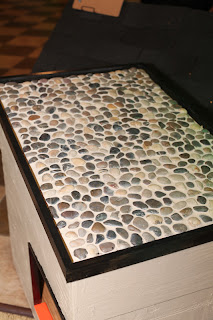 I always have so much fun at Restore and After taking pictures and placing bids on items. And I always give away a free photo shoot too! It's so much fun! If you've never been and you live in the Little Rock area, you should definitely make plans to come next year!
Posted by Cara Beth at 11:41 AM

Email ThisBlogThis!Share to TwitterShare to FacebookShare to Pinterest
Labels: Must Love Dogs, Restore and After