My husband is a retail manager and is usually guaranteed to be working every Saturday. Last night was an exception. Since Buie loves to cook and we love football, he was particularly excited about yesterday because it was pretty much a guaranteed win, right? (um..WRONG! but that's besides the point) B went to the store loaded up on "free day" goodies for the game. You see, 6 days a week we eat super healthy and then at least one meal or one day we have a free day. If you've read or followed Bill Phillip's Body for Life plan, it's similar to this. I've lost about 10 pounds so far and B has lost about 15. Anyway, so baked and fried wings were on the menu as well as chips and guacamole dip. We were all set. :)  We were going to go tailgate with some friends but had decided to save some money by not going to see the game live and just watch it on tv. (I'm so glad we did by the way.) 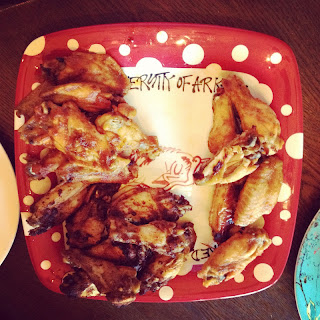 Earlier in the week I told my brother and sister in law about the project we had going on in our backyard and the enormous amount of sand we had delivered. We were talking about how fun it would be if Landon could come play in it. I mentioned it again to them and told them the workers would be filling in the rock on Monday. Which means no more fun sand to play in. :( It was now or never. So they loaded everyone up and headed down to Aunt RaRa and Uncle Buie's house for a fun filled evening outside enjoying our huge temporary sandbox and soaking in the awesome cool weather. 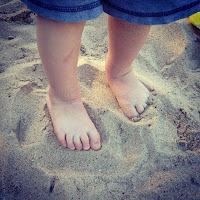 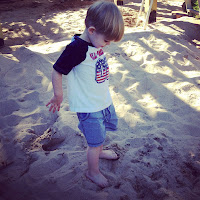 The weather was perfect. The company was perfect. Landon loved the sand. We buried his toes in the sand. We filled his dump trunk with sand. He got sand in his hair. He even ate a little sand. hehe. This occasion warranted me going to get my "good camera" and I was able to capture these two sweet little smiles. 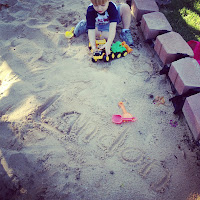 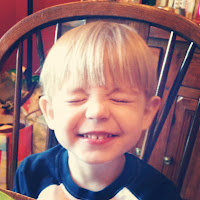 It's evenings like last night that I never want to end and I just want to shout it from the roof tops that I love these two little boys. I only wish that I saw my sweet nieces who live in Louisiana as often. Gosh, I love being an aunt. It's the greatest thing I've experienced thus far in life...well, besides marriage. :) My husband is pretty darn special.

Email ThisBlogThis!Share to TwitterShare to FacebookShare to Pinterest
Labels: family

You're a GREAT aunt! These boys love their RaRa! Thanks again for having us over, and thank Buie for the yummy food! It was awesome, as always. :)