On our last full day in Keystone, we had the day to ourselves. Lisa and Caleb went on a hike, but since I was STILL not used to the elevation changes after four days, we opted for something a little less strenuous - Horse back riding! :) Seriously, though, the elevation was making me do some weird things. All week long, I felt bloated & puffy. I had nosebleeds and this may be WAY too much information but everytime I ate it messed my stomach up. I also had a really bad headache the first two days we were there. I found out later that if you ever go to the mountains, like we did, you are suppossed to allow yourself at least 24 hours in Denver (which is at a lower elevation) to allow your body to adjust slowly to the change in elevation. I guess we'll no better next time!
But the elevation couldn't stop up from our trail ride! Here we are on our horses: Buie's horse's name is Pythagoras or Py for short. He was big and strong just like Buie! :) My horse's name was Lucas and Lucas and I bonded because well, he is a snacker too. Everytime we slowed down enough or passed by a bright green patch of grass, Lucas slowly creeped over to the grass to snack. We weren't supposed to let them snack on the trail ride (not sure why) but just between you and me, I let him have a few bites here and there. Lucas was so obedient (besides the snacking). He went left when I pulled left and stopped when I pulled up. I think he probably could have walked that trail with his eyes closed. 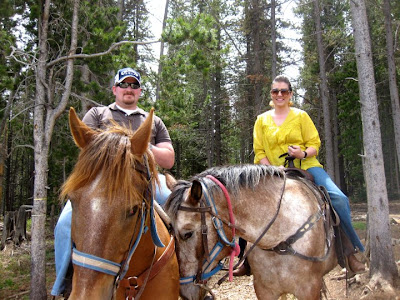 This was apparently Buie's first time EVER to be on a horse! I had a hard time believing him because he was such a natural. He just swung his leg over the top of the horse and he was up, like he had mounted a thousand times! 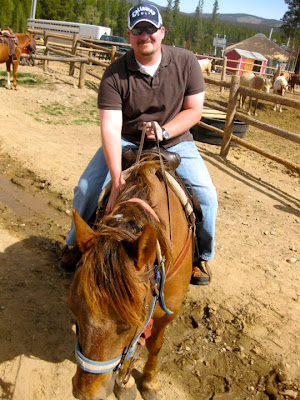 When we came to our first steep hill, I was like "Oh my!" But our horses handled it like pros. To help them out, our guides told us to lean forward to help shift the weight forward - like Buie is doing here in this picture. 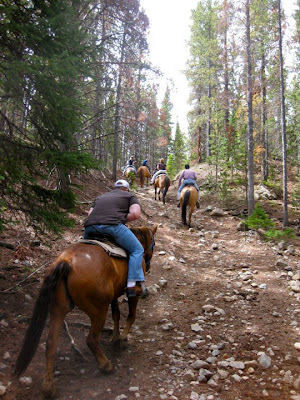 Made it up the first steep incline! Good job baby! 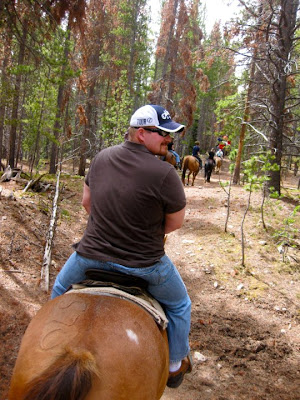 Over the river... No problem! 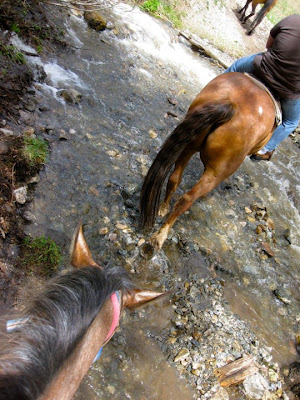 We managed to hand off the camera (without dropping it) so Buie could get a pic of me on Lucas! We had such a great time on our trail ride! 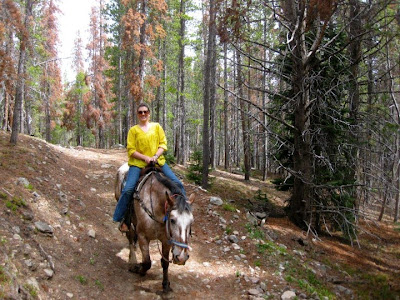 I think the only time I got even a little bit nervous was when Lucas would walk SO CLOSE to the cliffs. This cliff is not even a big drop off. He would walk right next to the edge of the cliff - SCARY! 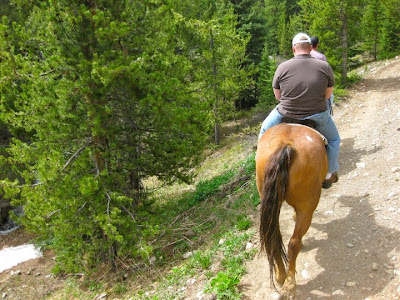 I think the funniest part of the whole ride was when Lucas bit Py in the butt and then Py reared back and kicked Lucas in the chest. I told you he was a snacker! hehe. He got a little hungry and thought the bootie looked yummy, I guess. Here we are at the end of our ride. The whole trail ride was almost 2 hours. It went up the mountains and back down, so there were some pretty steep inclines and declines we had to navigate but it was fun! The coolest part to me was that part of the trail was where the ski lifts were. They weren't in use though when we went. The lifts had just closed down for the season.
Can you see the ski lifts in this pic below? 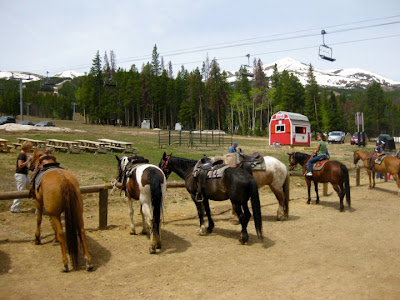