I thought I'd take the time to reflect for our anniversary. Four years ago today, I married Brent Marks Buie. We met at our college Alma mater, Ouachita Baptist University in 2005. I remember the exact moment I thought in my head that I wanted to get to know this guy better. I was sitting on the top step at my friend's house and Buie came in the front door and stood at the bottom of the stairs. He was hot and sweaty from working out. It was May in Arkansas which meant it was already probably 90 degrees outside too. He wasn't wearing anything special -  just work out clothes - but I think that's why I was instantly attracted to him. If he looked this good after having just worked out, I imagined he cleaned up really nice too. ;) As he looked up at me and smiled, I immediately was aware of how uncute I looked and I was mad at myself for not fixing myself up that morning.

We had a mutual friend (Andrea) which I quickly found out would be the key to getting this whole relationship started. As soon as he left Andrea's house that day, I'm pretty sure I attacked her and said something along the lines of "Hook me up"or "Where have you been hiding him?" haha. Nice and subtle, huh. After Andrea put a bug in his ear, I think we handled the rest ourselves. I do remember the first time Buie came over to my apartment he brought his roommate with him. While confused at first, I look back and giggle because I think it's cute how even big college football guys need backup every now and then. The next time he came over sans roommate with dinner and a movie in hand. Looking back, we never really had a big let's get all dressed up and go to a fancy restaurant first date...but then again, we aren't really those kind of people. Our first date is exactly what we prefer to do now, order take in and watch a movie on the couch. So in reality, our first date was perfect.... except for maybe the choice of movie but that's another story. ;) 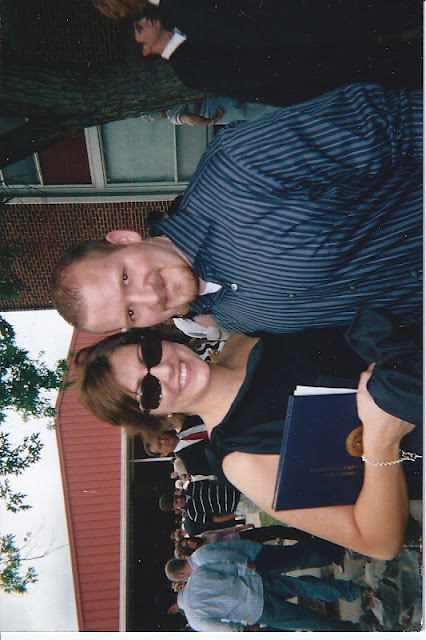 This picture is very special to me because it is the first picture we ever took together. This was taken just after my college graduation and he came to see me graduate. We had only been seeing each other for about 2 week at this point. The very next day I left for Montreal for two weeks but we talked on the phone every day! :) This pic is framed in our house and each time I look at it, it reminds me of several things: a) where we came from b) how far we've come and c) how much weight we've both gained! ha! Gotta love being married to a guy who can cook!

Happy Anniversary to my love.
Posted by Cara Beth at 8:00 AM

Email ThisBlogThis!Share to TwitterShare to FacebookShare to Pinterest
Labels: marriage, our story