On Thursday morning our precious George passed away. Sigh. It was so sudden that I was shocked! I still am shocked.... I guess I should tell you the story. 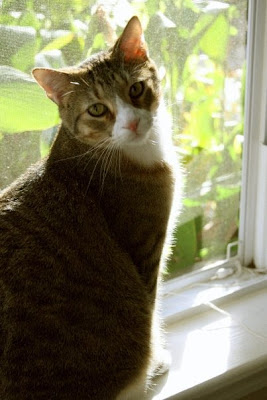 The week before last, we noticed George had a hurt paw. He was limping on it and kept licking it. It was obvious that it was bothering him. After looking at it closely, we determind that it looked like a bite mark, a small bite mark, but never the less, still a bite mark from Hazel, we assumed. Hazel is our other cat. Sometimes they play rough just like any brother & sister do. We had never known them to BITE each other though so we were a little surprised. We did what any normal parent would do, we cleaned it, put medicine on it and wrapped it up so he couldn't lick off the medicine. We kept an eye out to make sure it didn't get infected or look any worse. The next day it actually looked a lot better! yay! But we noticed Georgie wasn't acting like he felt better. He was staying on his bed all day and all night. He didn't have the energy that he used to. We talked about taking him to the vet last week. Thursday, I believe it was, I had an appointment to bring George in. I just wanted to be sure.

This is the hard part, for me, at least, because if I would have brought him in LAST Thursday, George might be here. I am kicking myself. Buie says I can't blame myself which I know is true but still... it sucks to think "what if." 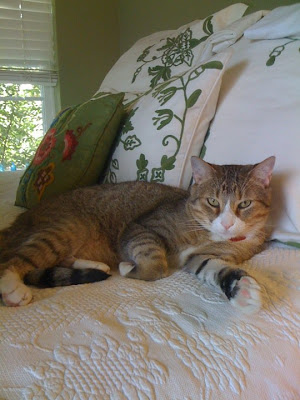 Thursday: They were calling for snow. We let out early from work - our building closed. I went home, checked on George. He seemed to be better. He was up walking around, so I called and canceled our appointment. I didn't want to drive in the snow since we were a good 25 minutes away from the vet. The snow we had just had weeks before was bad and it makes driving dangerous. Seems like a silly reason... now. Hindsight is 20/20.

Friday, Saturday, Sunday rolled around. He had a good last weekend. He ate some mushy food (as we call it), drank some water and overall seemed to be feeling better. His paw looked okay too. I was relieved. I was happy George was feeling better. 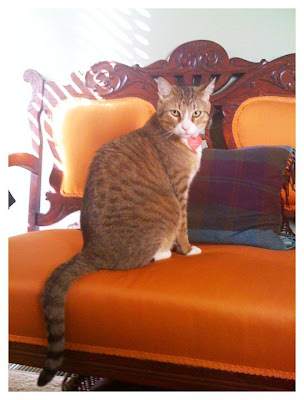 Monday and Tuesday were a different story. He took a turn for the worse. He stopped eating almost completely and was barely drinking any water. By Tuesday evening, Buie & I were both concerned.... Why wasn't he eating? We kept wondering. His paw must be bothering him more than we realized. Buie said he had a day off on Thursday (one week after his original appointment). "Why don't I take him in on Thursday?" Buie asked. But I thought waiting til Thursday was too long. This was Tuesday night. "Why don't you bring him in TOMORROW?" I think the sooner the better. I just don't like that he'd not been eating today. Okay. It was decided. We would bring him to the vet on Wednesday. Surely they could fix his paw and make him feel better. Tuesday night we went and got George from his bed and carried him over to the couch. He laid in our lap most of the night. When I went to bed I brought Georgie with me. He slept in our bed all night. I had no idea that was his last night with us. 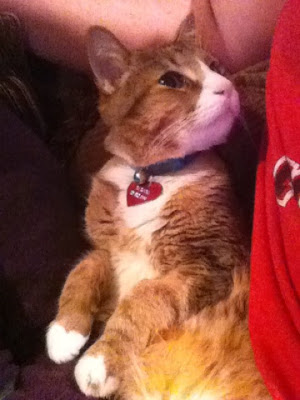 This was the last pic of little George. He was so cute sitting in our lap that I just had to snap a pic. So glad I did.

Wednesday, after Buie had dropped off George at our vet, I got a call from the dr. George was severely dehydrated and they were starting him on an IV. He wasn't sure about his paw though. The doctor seemed to think that George was suffering from complication from his declawing surgery in 2006. I know what you are thinking because I thought it too. Why is he JUST now suffering the consequences from a surgery that took place 5 years ago!? From the moment I got my cats back from their surgery, I regretted it. I have always said (since that day) that I would NEVER declaw a cat again. It was obviously too late for George and Hazel though since they were already declawed. We humans declaw cats for selfish reasons and there is absolutely no reason a cat should have to go through that. If you want to have a cat indoors, then get a scratching post. You can read more about process of clawing a cat here, here and how INHUMAN it is. It is basically like cutting off our fingers and toes because it is a bone amputation. If you say you love animals like we do then PLEASE do not get them declawed! It is just wrong!

In the end, George died from dehydration but I truly believe NOW that it was due too his declawing surgery that took place years ago. He was suffering from a painful regrowth that is not visible to the eye usually. George could have been suffering from this for months or years and we never knew it. It breaks my heart to know that this precious animal COULD have lived a long(er) healthy life if it weren't for the ignorance of humans... the ignorance of ME, specifically. I call myself an animal lover, but no animal lover would rightly go and amputate all 10 toes of an animal or pay someone else to do it! As you can probably tell, it makes me mad to think about all the people who are declawing their cats because they were like me, they simply didn't know what they were doing. They didn't do their research BEFORE the surgery.


Please don't be ignorant, people. Tell people what declawing is really about. Google it and find out for yourself. You'll find horrifying pictures that will break your heart. 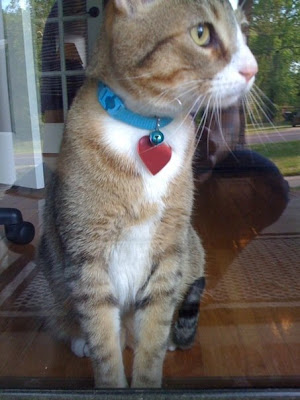 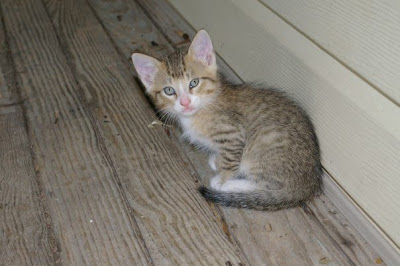 I know that George had a good life. Buie keeps telling me that he had a better life than he would have otherwise. He was born in the woods in Louisiana. This picture above is the first time I ever met George and this was his first portrait. :) I picked him out of a litter of eight kittens because of his little pink nose. He was the only one in the litter with a pink nose. While George was with us he ate the best organic foods, got treats daily when I got home from work, slept in the coziest of beds and were loved 100% by his owner. Despite his last week here on Earth, his whole life, he was loved.
Posted by Cara Beth at 7:11 AM

I don't understand the "just a cat" or "just a dog" people. To me, they are as big a part of the family as anyone else. I'm so sorry about George! I know you're hurting terribly! Thoughts and prayers!!

I'm sorry! That's so sad.
Also sorry that I think I referred to your pet as a pup in a tweet, stupid dog-centric person that I am.
I'm glad he had a nice last weekend.

I am still so sad for you! I know you miss George so much! I have thought about you constantly. Our pets are our children! My heart breaks for you! :(