In my last post I mentioned that we adopted three rabbits. With the help of our nieces and nephews, we named them Mr. Bun Bun, Tiana and Hopper. We have thoroughly enjoyed having them around and have learned a lot about bunnies. Actually I have been keeping a list of things we have learned about our bun buns. I may share the list in another post. They are fascinating creatures, including their ability to procreate. You know the crude expression "doing it like rabbits?" Well, I totally understand why it was created. One of the interesting facts about rabbits is that they are a "breed-at-will" mammal, meaning they are "ready to go" at anytime. We found this out the hard way. 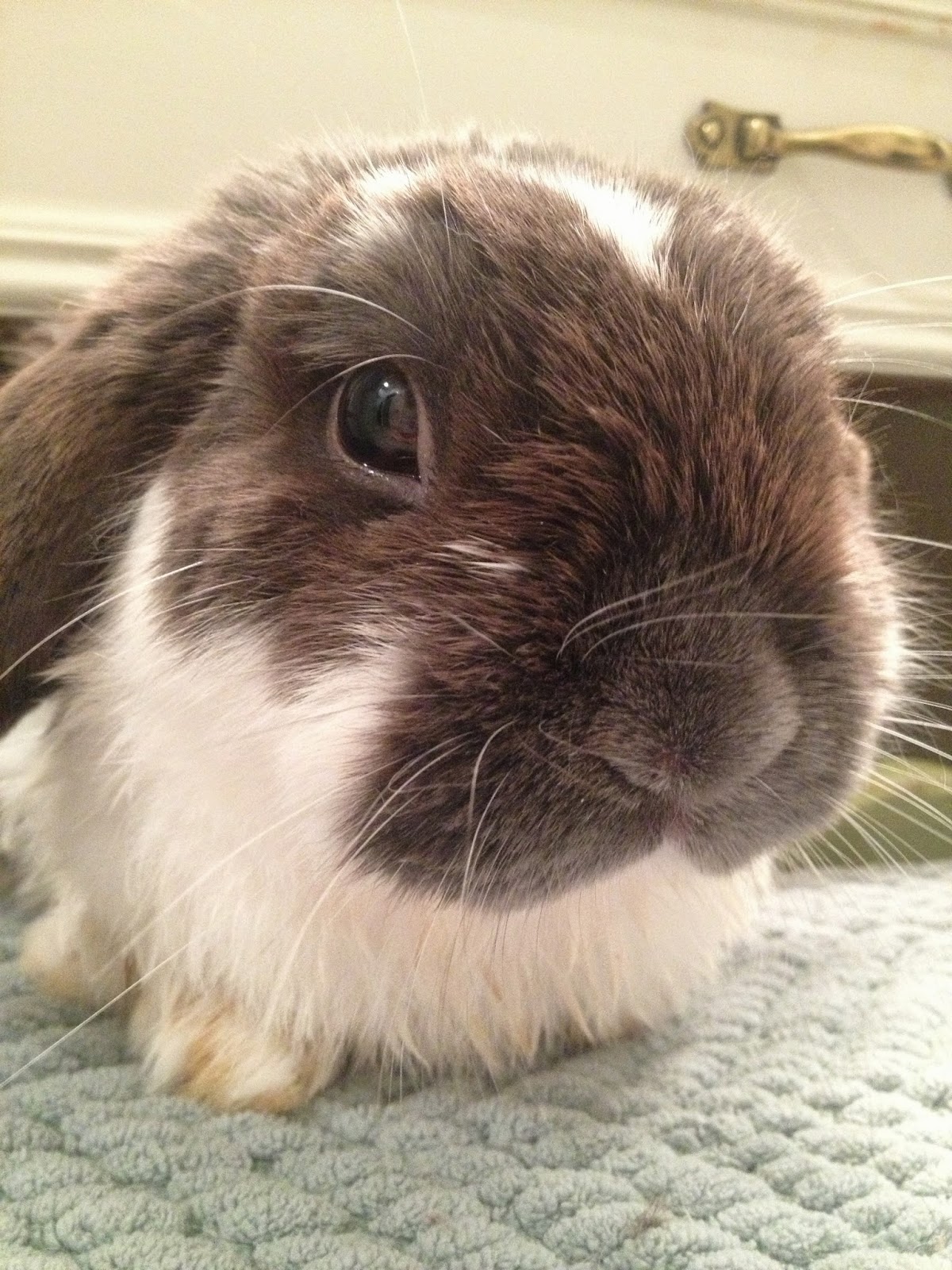 'So far we are FAILING at raising bunnies. Tiana dug out of her cage and had a early morning rendezvous with Mr. Bun Bun who is NOT yet fixed. We have NO IDEA how much "cuddling" went on but we'll know for sure in 31 days if there are extra little bunnies hoping around. I'm SO not ready for babies and especially not a litter of them. I'm keeping my fingers crossed that ALL they did was cuddle. Buie is currently making plans to build a more secure cage and I'm thinking I should get Mr. Bun Bun to the vet ASAP!'

We were completely clueless if A. they had even done anything or B. if Tiana had become pregnant or C. if she was, in fact, pregnant how many kits were about to be added to our zoo!!

We immediately googled "rabbit pregnancy" and guess what? A rabbit's gestational period is 28-31 days. So the good news is we would find out in a month if were going to have a baby...and the bad news? Well, the bad news is that we could possibly have a lot more babies added to our house in one month.

I added the date to my phone. I counted 28 days from the "incident" as I call it. That whole month I was on bump watch. I kept telling Buie that I thought she was getting fatter. Buie was in denial but I knew she was pregnant. Call it woman's intuition or whatever, but I was 80% sure she was pregnant and I was kind of excited. Because let's be honest, who wouldn't want to stare at this cute little face? 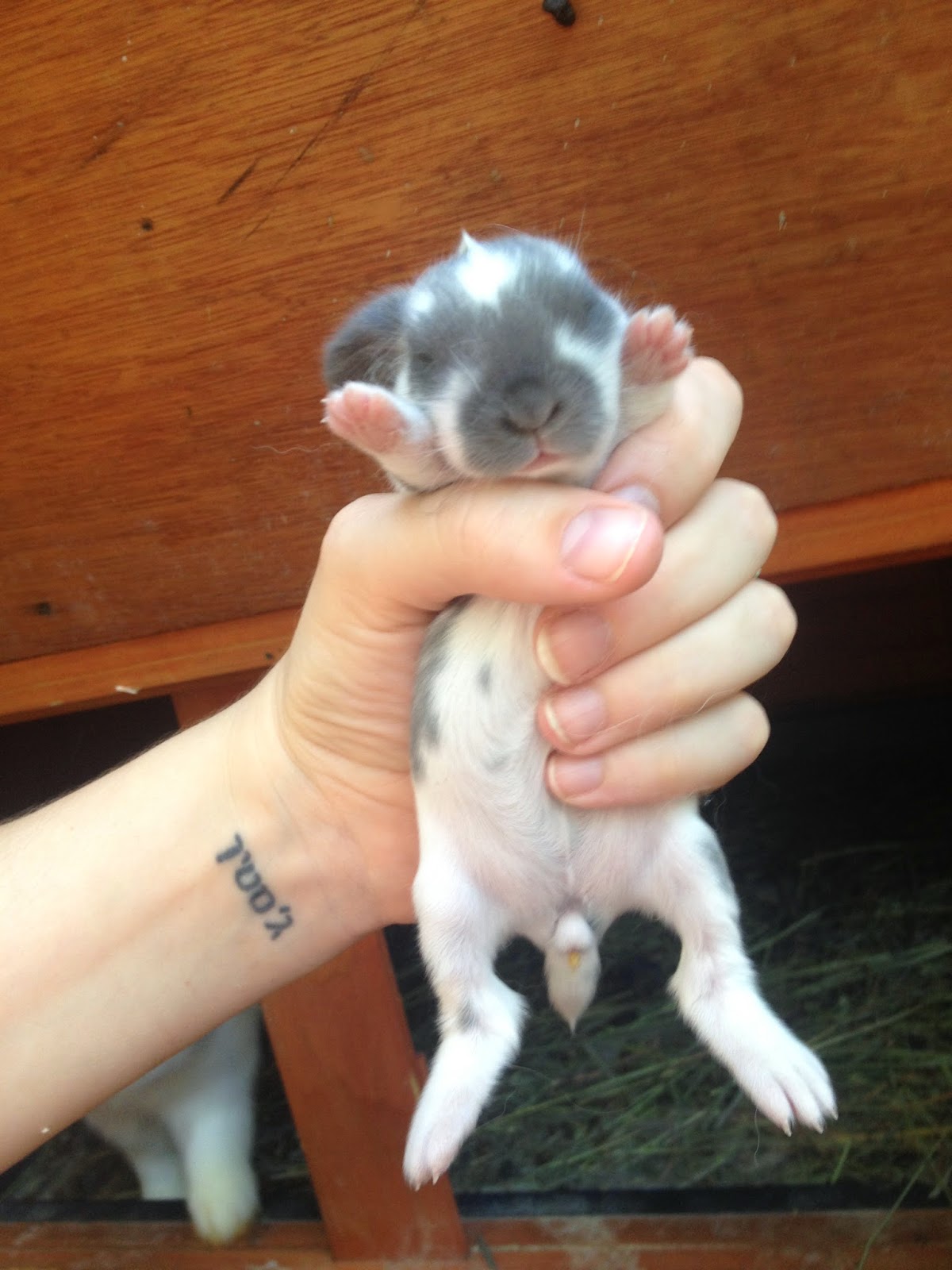 She was due to give birth the Thursday before Memorial Day weekend IF she was pregnant (remember we still didn't know if she was pregnant or not and had no clue how many babies were in there if she was). We were scheduled to shoot a wedding on Saturday in Texas. We kept watching. Friday was day 32 and the day we were leaving for Dallas. By the way, I feel it very necessary to mention that my husband threatened to NOT go with me to Texas if the babies were born before we left. He just couldn't see how we could leave them here alone while we were off shooting some wedding. Seriously!? I mean, that's sweet and all, honey, but what are you going to do breast feed the bunnies yourself?? 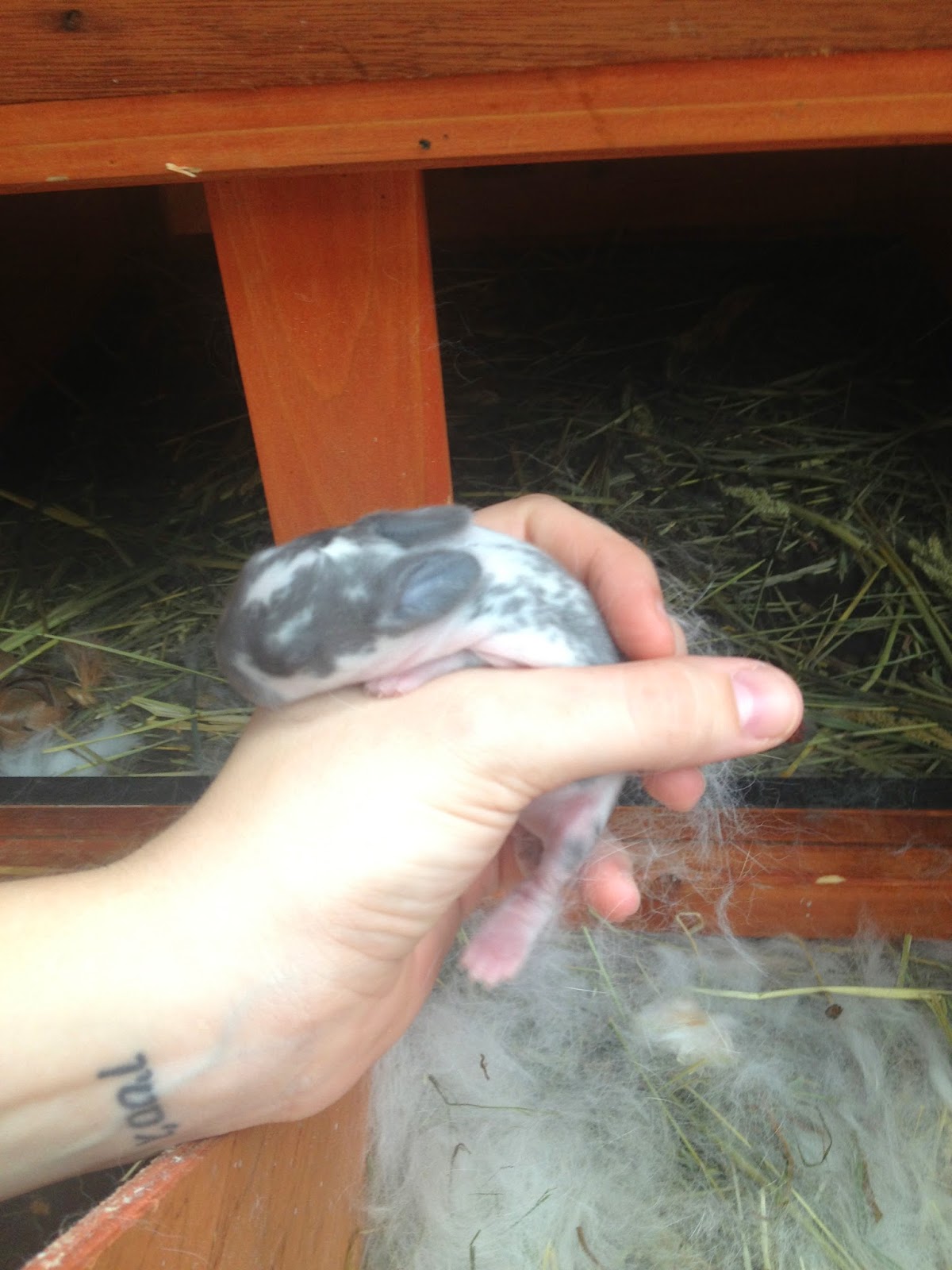 No bunnies were born on Friday and honestly we kind of assumed she wasn't pregnant and forgot about it. We had a crazy busy weekend in Texas. Our pet sitter took great care of our bunnies while we were away with no mention of a baby..so we were in the clear, right?

We got home Monday night, fed and watered the bun buns and everything was lovely and seemed normal. Tuesday afternoon rolls around after Buie and I slept in late...embarrassingly late actually. I went to feed the rabbits and I opened up the side of their hutch and I see a huge wad of bunny hair like a little nest, in the picture below. Since Buie and I had been doing some mad research we knew that rabbit mommas will make a nest right before giving birth. My first thought was Oh crap, she about to give birth! And then the big mound of hair started to move and I freaked out! 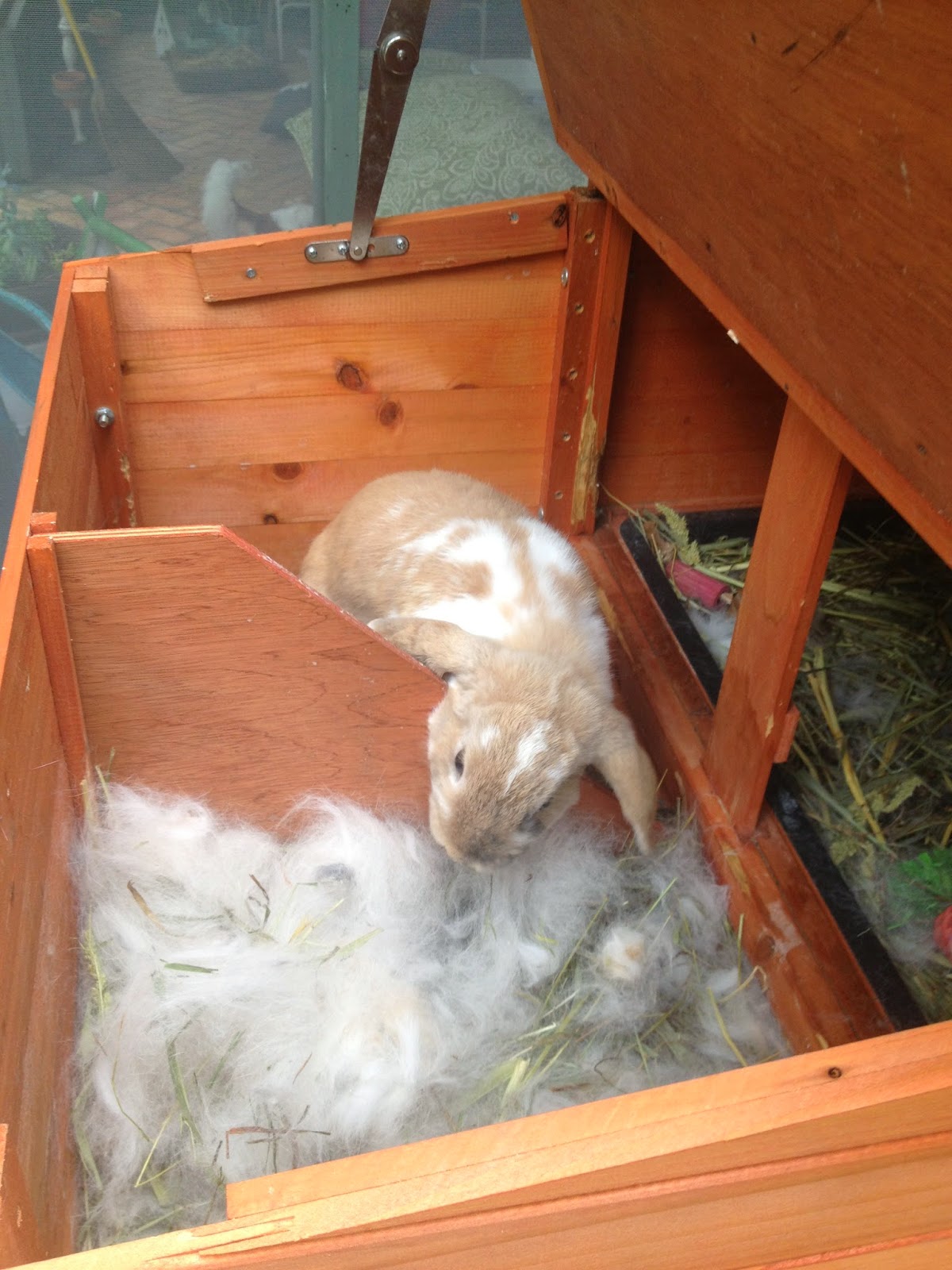 Oh my gosh! She WAS in fact pregnant and sometime between Friday night and Tuesday morning, Tiana gave birth to our newest little baby bun bun. And here he or she is. Yes, that's right, we still don't know if it's a boy or girl yet.... so for now it's name is Baby Bun Bun. 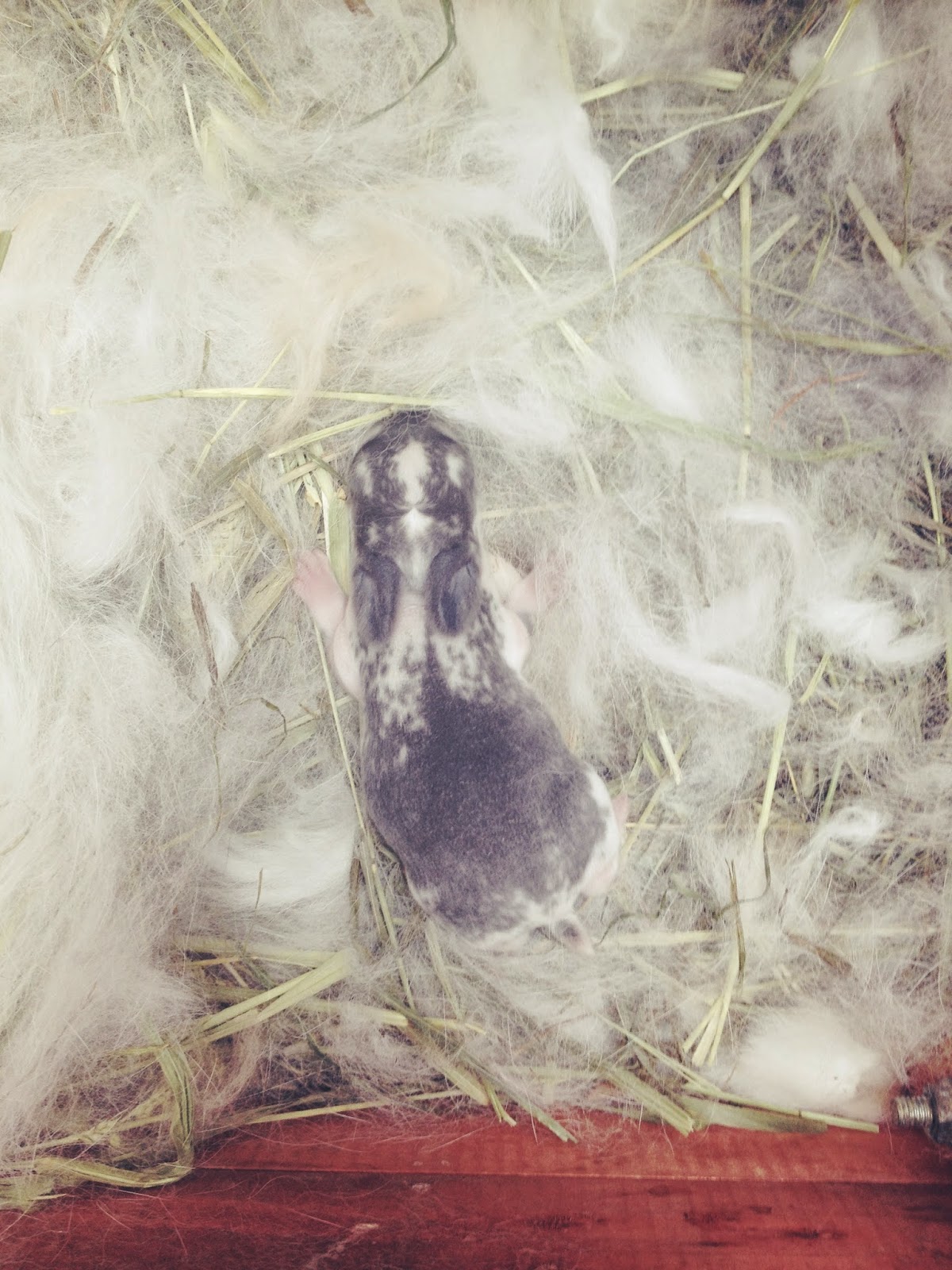 We have loved watching Baby Bun Bun grow these past 2 and a half weeks. I honestly can't believe how fast he's grown. 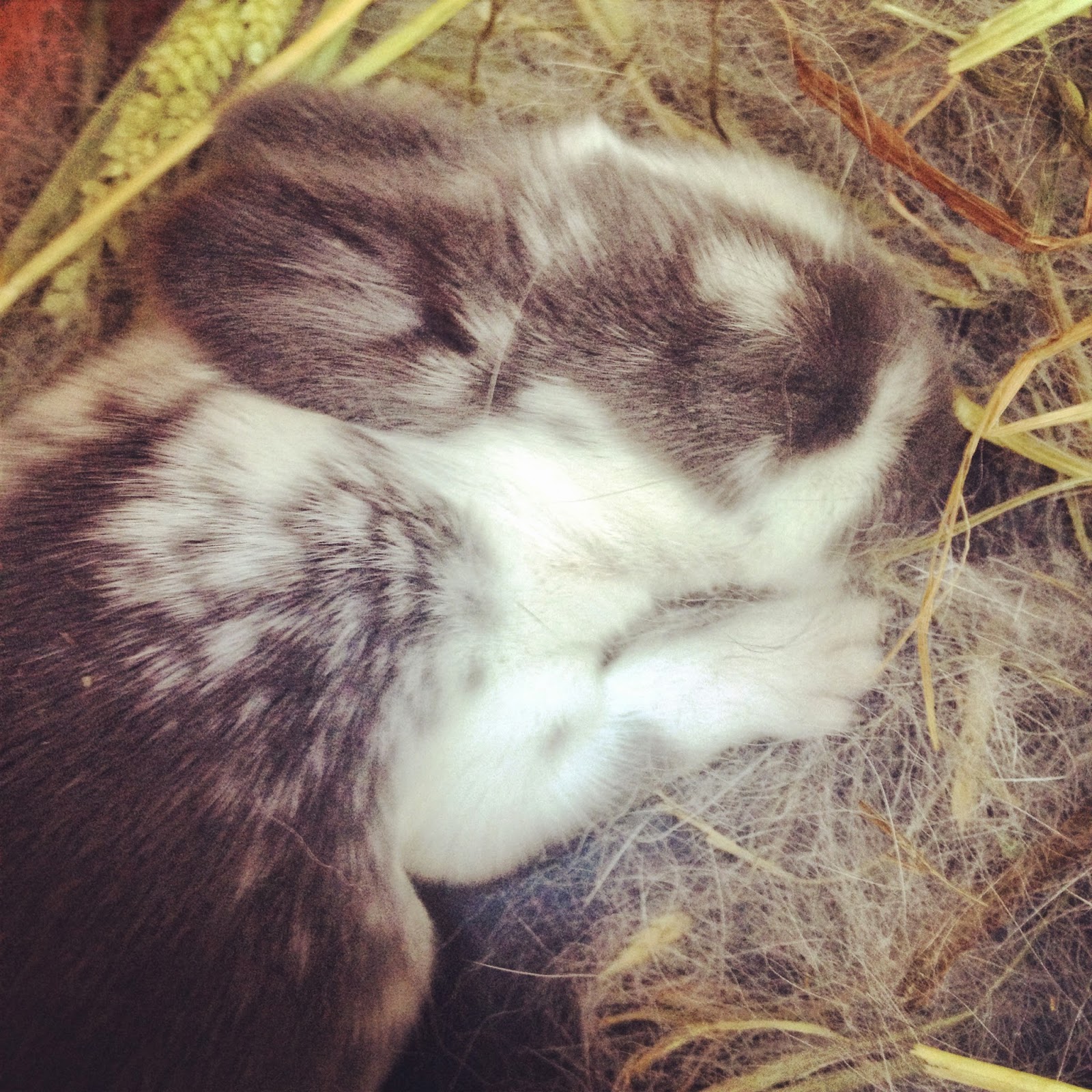 We had fun introducing him to our nieces and nephews, too. My niece, Makaylan, wanted to name him Aladdin. :) 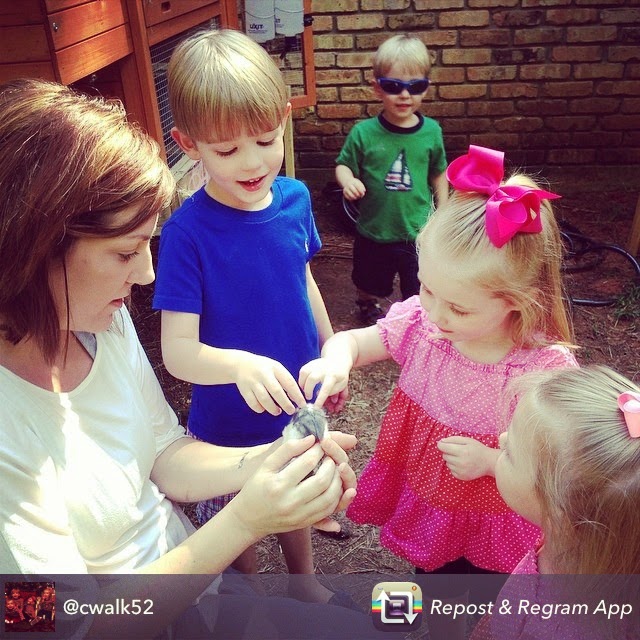 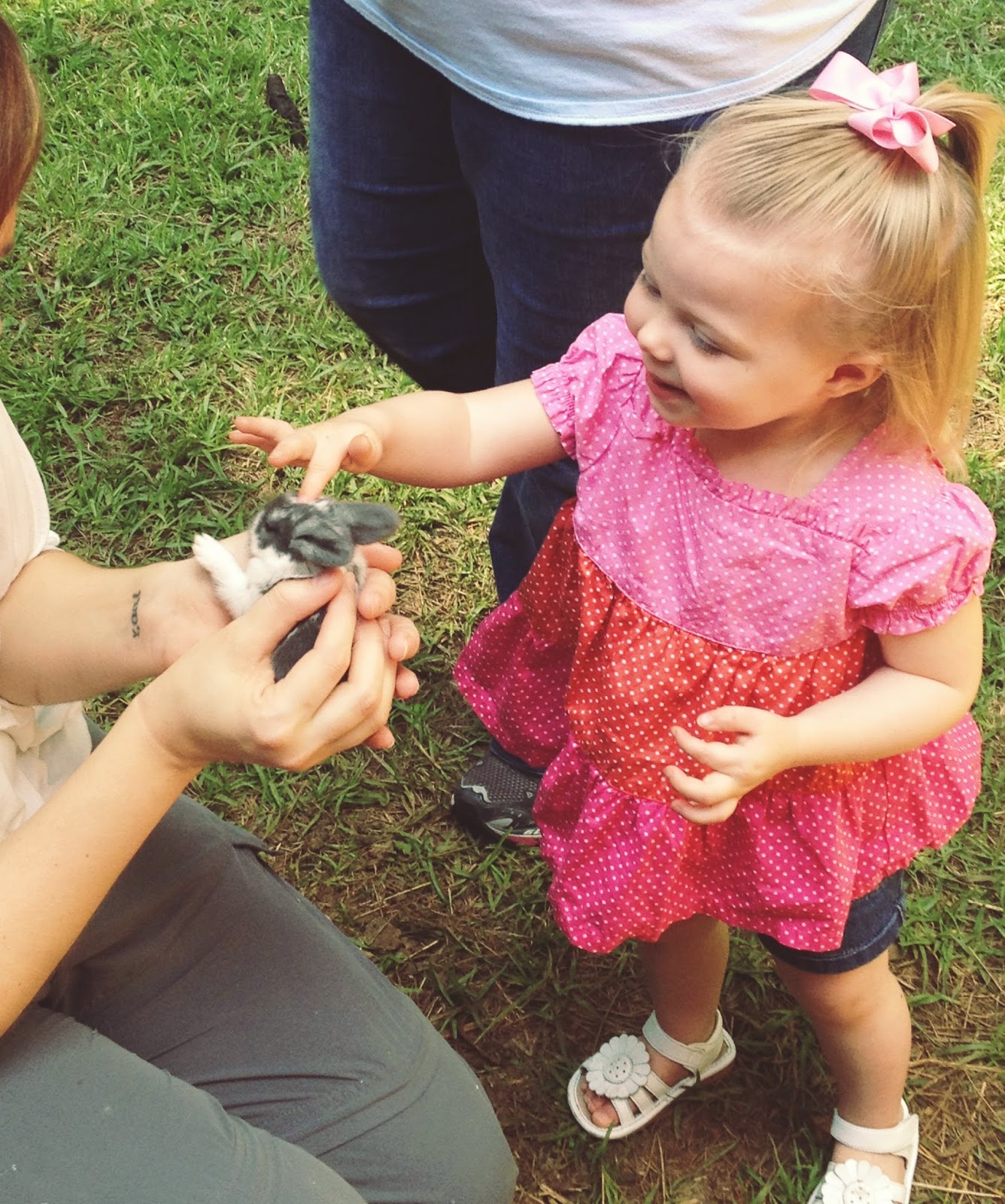 Baby Bun Bun has a vet appointment this Friday to get some things checked out and to find out the sex. I thought he was a boy at first glance but now I'm not so sure. ha. I told you were are beginners at this. We are a little concerned about his back legs. He doesn't seem to be using them very much so we are taking him in to get him checked out just to make sure everything is ok. The research we have done says he should be hopping around and using his legs more than he is so we just want to cautious. Say a little bunny prayer for Baby Bun Bun on Friday morning. :)